How to build AutoML from scratch – Alexander Mamaev – Medium.pdf 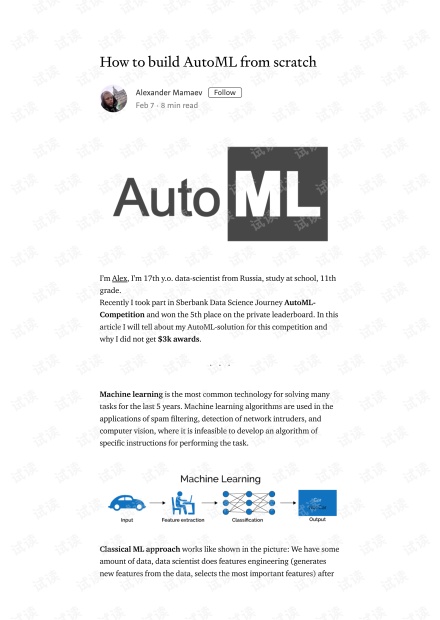 如何从头开始构建autoML，Bridging WebML to model-driven engineering: From document type definitions to meta object facility，Meta-models are a prerequisite for model-driven engineering (MDE) in general and consequently for model-driven web engineering in particular. Various web modelling languages, however, are not based on meta-models and standards, like object management group's prominent meta object facility (MOF). Instead they define proprietary languages rather focused on notational aspects. Thus, MDE techniques and tools cannot be deployed for such languages preventing to exploit the full potential of MDE in terms of standardised storage, exchange and transformation of models. The WebML web modelling language is one example that does not yet rely on an explicit meta-model in the sense of MDE. Instead, it is defined in terms of a document type definition (DTD), and implicitly within the accompanying tool. Code generation then has to rely on model-to-code transformations based of extensible stylesheet language transformations (XSLT). We propose a meta-model for WebML to bridge WebML to MDE. To establish such a meta-model, instead of remodelling WebML's meta-model from scratch, a semi-automatic approach is provided that allows generating MOF-based meta-models on the basis of DTDs. The meta-model for WebML accomplishes the following aims: first, it represents an initial step towards a transition to employ MDE techniques within the WebML design methodology. Second, the provision of a MOF-based meta-model ensures interoperability with other MDE tools. Third, it represents an important step towards a common meta-model for Web modelling in future.

84浏览
In this book, you’ll learn how many of the most fundamental data science tools and algorithms work by implementing them from scratch. If you have an aptitude for mathematics and some programming ...

ASP.NET Core 1.1 For Beginners: How to Build a MVC Website

32浏览
and understand how and when they're used in data science ■■ Collect, explore, clean, munge, and manipulate data ■■ Dive into the fundamentals of machine learning ■■ Implement models such as k-...

100浏览
growing field, and it doesn’t take a great deal of sleuthing to find analysts breathlessly prognosticating that over the next 10 years, we’ll need billions and billions more data scientists than we ..

Programming Bitcoin: Learn How to Program Bitcoin from Scratch

45浏览
Dive into Bitcoin technology with this hands-on guide from one of the leading teachers on ... Author Jimmy Song shows Python programmers and developers how to program a Bitcoin library from scratch.

75浏览
Welcome to Machine Learning Algorithms From Scratch. This is your guide to learning the details of machine learning algorithms by implementing them from scratch in Python. You will discover how to ...
评论 收藏 举报
资源评论