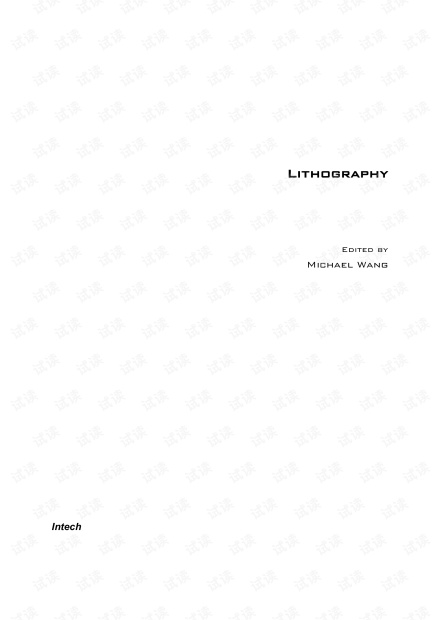 Lithography, the fundamental fabrication process of semiconductor devices, is playing a critical role in micro- and nano-fabrications and the revolution in high density integrated circuits. Traditional optical lithography (photolithography) including contact and project photolithography has contributed significantly to the semiconductor device advancements. As the resolution requirement increases for fabrication of finer and smaller components and devices, the technological dependence on photolithography becomes a serious problem since the photolithography resolution is restricted by the diffraction limitation of optics. Reducing the light wavelength from blue to near ultraviolet (UV) and to deep UV is expected to improve the photolithography resolution, but it is far not enough to catch up with the pace in resolution demand in integrated circuit fabrication. To overcome the limitation of photolithography, several advanced lithography techniques have emerged including maskless laser direct write lithography to eliminate the needs of photo masks, gray-scale lithography to increase the aspect ratio of the lithographic features, immersion lithography to increase the numerical aperture of the focusing optics and thus the resolution, and lithographic techniques based on further reducing wavelengths for better resolution such as extreme ultraviolet (EUV) lithography and X-ray lithography. The uses of particle waves like electrons and ion beams have resulted in high resolution electron beam (E-beam) lithography and ion beam lithography. Besides these wave and beam based lithographic techniques, there are also direct contact lithography such as soft lithography using soft molding and nanoimprint lithography with extremely high resolution. The plasmonic lithography is now in the horizon. This book is the result of inspirations and contributions from many researchers worldwide. Although the inclusion of the book chapters may not be a complete representation of all lithographic arts, it does represent a good collection of contributions in this field. We hope readers will enjoy reading the book as much as we have enjoyed bringing the book together. We would like to thank all contributors and authors of book chapters who entrusted us with their best work. We also acknowledge the great effort of people who had invested their time in reviewing manuscripts and revision updates. Each lithographic technique has its advantages and limitations. The conventional photolithography is not discussed here due to its technological maturity. This book begins with maskless, gray-scale, and immersion lithography since they are most close to the conventional photolithography in terms of resolution. Laser nonlinear lithography with capability of non-flat surface fabrication and character projection lithography are also included in this chapter. Further chapters present discussion on objective lens, resist materials and processing, and optical proximity correction.

Lithography is an extremely complex tool – based on the concept of “imprinting” an original template version onto mass output – originally using relatively simple optical exposure, masking, and etchin

Optical Lithography: Here is Why

Readers will also get a primer on the outlook of optical lithography and the many next-generation technologies that may greatly enhance semiconductor manufacturing in the near future. Topics ...

Materials and Processes for Next Generation Lithography

The science and technology of lithography, especially advanced semiconductor lithography, have now reached such an advanced stage of development and promise such numerous applications (as evidenced by

In contrast to previous work, which was largely limited to one-dimensional modifications, Tuncay Ozel presents a technique, termed coaxial Lithography (COAL), which allows for the synthesis of ...

Extreme ultraviolet lithography (EUVL) is the principal lithography technology-beyond the current 193-nm-based optical lithography-aiming to manufacture computer chips, and recent progress has been ..

The publication of Principles of Lithography, Third Edition just five years after the previous edition is evidence of the quickly changing and exciting nature of lithography as applied to the ...

introduction to the Subwavelength Optical Lithography with Phase-Shift Photomasks

Lithographers at semiconductor companies are integrators. We combine optics, precision machines, photochemicals, and photomasks into working processes. While chip makers often get the glory, the lens

Design for Manufacturability with Advanced Lithography

This book introduces readers to the most advanced research results on Design for Manufacturability (DFM) with multiple patterning lithography (MPL) and electron beam lithography (EBL). The authors ...