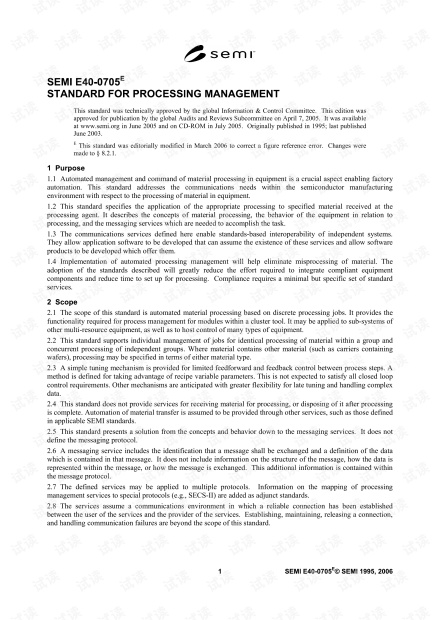 SEMI E040-0705_PMS半導體標準規範 ，所有半導體公司都必需尊守此規範 About the SEMI Standards Program Why standards? The SEMI International Standards Program is one of the key services offered by Semiconductor Equipment and Materials International (SEMI) for the benefit of the worldwide semiconductor, photovoltaic (PV), LED, MEMS and flat panel display (FPD) industries. Standards offer a way to meet the challenges of increasing productivity while enabling business opportunities around the globe. The program, started over 40 years ago in North America, was expanded in 1985 to include programs in Europe and Japan, and now also has technical committees in China, Korea and Taiwan. In 1997, the Program was expanded to cover other areas with activity in these industries among suppliers and users. The program operates as a neutral forum for the exchange of information among suppliers and users resulting in the production of timely and technically accurate specifications and other standards of economic importance to the industry. It is a vehicle for networking, partnering, and professional growth. Over 5,000 technologists worldwide, representing both device manufacturers and equipment and materials suppliers, participate in the program. These individuals work toward resolving a variety of process and product related issues in both the front and back-end areas in semiconductor, photovoltaic, and flat panel display manufacturing.