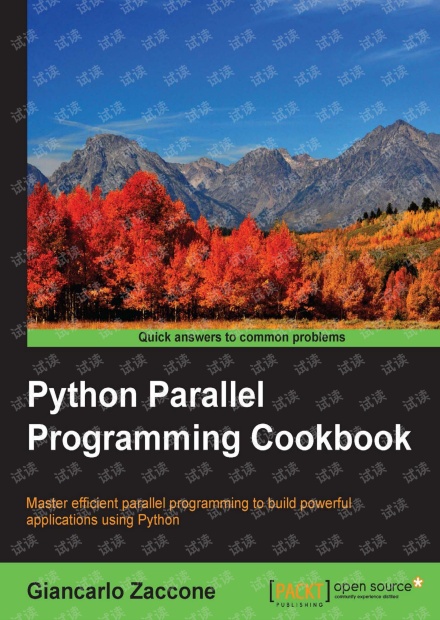 Master efficient parallel programming to build powerful applications using Python About This Book Design and implement efficient parallel software Master new programming techniques to address and solve complex programming problems Explore the world of parallel programming with this book, which is a go-to resource for different kinds of parallel computing tasks in Python, using examples and topics covered in great depth Who This Book Is For Python Parallel Programming Cookbook is intended for software developers who are well versed with Python and want to use parallel programming techniques to write powerful and efficient code. This book will help you master the basics and the advanced of parallel computing. What You Will Learn Synchronize multiple threads and processes to manage parallel tasks Implement message passing communication between processes to build parallel applications Program your own GPU cards to address complex problems Manage computing entities to execute distributed computational tasks Write efficient programs by adopting the event-driven programming model Explore the cloud technology with DJango and Google App Engine Apply parallel programming techniques that can lead to performance improvements In Detail Parallel programming techniques are required for a developer to get the best use of all the computational resources available today and to build efficient software systems. From multi-core to GPU systems up to the distributed architectures, the high computation of programs throughout requires the use of programming tools and software libraries. Because of this, it is becoming increasingly important to know what the parallel programming techniques are. Python is commonly used as even non-experts can easily deal with its concepts. This book will teach you parallel programming techniques using examples in Python and will help you explore the many ways in which you can write code that allows more than one process to happen at once. Starting with introducing you to the world of parallel computing, it moves on to cover the fundamentals in Python. This is followed by exploring the thread-based parallelism model using the Python threading module by synchronizing threads and using locks, mutex, semaphores queues, GIL, and the thread pool. Next you will be taught about process-based parallelism where you will synchronize processes using message passing along with learning about the performance of MPI Python Modules. You will then go on to learn the asynchronous parallel programming model using the Python asyncio module along with handling exceptions. Moving on, you will discover distributed computing with Python, and learn how to install a broker, use Celery Python Module, and create a worker. You will also understand the StarCluster framework, Pycsp, Scoop, and Disco modules in Python. Further on, you will learn GPU programming with Python using the PyCUDA module along with evaluating performance limitations. Next you will get acquainted with the cloud computing concepts in Python, using Google App Engine (GAE), and building your first application with GAE. Lastly, you will learn about grid computing concepts in Python and using PyGlobus toolkit, GFTP and GASS COPY to transfer files, and service monitoring in PyGlobus. Style and approach A step-by-step guide to parallel programming using Python, with recipes accompanied by one or more programming examples. It is a practically oriented book and has all the necessary underlying parallel computing concepts. Table of Contents Chapter 1: Getting Started with Parallel Computing and Python Chapter 2: Thread-based Parallelism Chapter 3: Process-based Parallelism Chapter 4: Asynchronous Programming Chapter 5: Distributed Python Chapter 6: GPU Programming with Python

This book will teach you parallel programming techniques using examples in Python and will help you explore the many ways in which you can write code that allows more than one process to happen at ...

Python GUI Programming Cookbook Second Edition Copyright © 2017 Packt Publishing All rights reserved. No part of this book may be reproduced, stored in a retrieval system, or transmitted in any form o

Python, a widely-known programming language, is also one of the leading open platforms for data science. IPython is a mature Python project that provides scientist-friendly interactive access to ...

Utilize the parallel support functionality that was introduced in PostgreSQL 9.6 Book Description PostGIS is a spatial database that integrates the advanced storage and analysis of vector and raster .