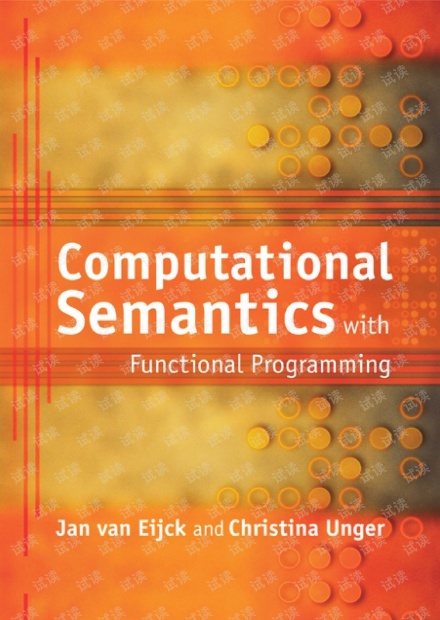 Cambridge - Computational Semantics with Functional Programming Oct 2010 Computational Semantics with Functional Programming 416 pages Publisher: Cambridge University Press; 1 edition (October 31, 2010) Language: English ISBN-10: 0521757606 ISBN-13: 978-0521757607 Computational semantics is the art and science of computing meaning in natural language. The meaning of a sentence is derived from the meanings of the individual words in it, and this process can be made so precise that it can be implemented on a computer. Designed for students of linguistics, computer science, logic and philosophy, this comprehensive text shows how to compute meaning using the functional programming language Haskell. It deals with both denotational meaning (where meaning comes from knowing the conditions of truth in situations), and operational meaning (where meaning is an instruction for performing cognitive action). Including a discussion of recent developments in logic, it will be invaluable to linguistics students wanting to apply logic to their studies, logic students wishing to learn how their subject can be applied to linguistics, and functional programmers interested in natural language processing as a new application area.

Introduction to Computational Models with Python

programming language R, with all the codes exhibited and commented in the text; there is also the possibility to download all programs from the book’s website.1 The Appendix contains a brief ...

3星 · 编辑精心推荐
The parameter ... For pedagogical purposes the book includes several computational problems and exercices. To prevent students from getting stuck on exercises, detailed corrections are provided.

A Primer on Scientific Programming with Python, 5th Edition

5星 · 资源好评率100%
The book serves as a first introduction to computer programming... By blending programming, mathematics and scientific applications, the book lays a solid foundation for practicing computational scien