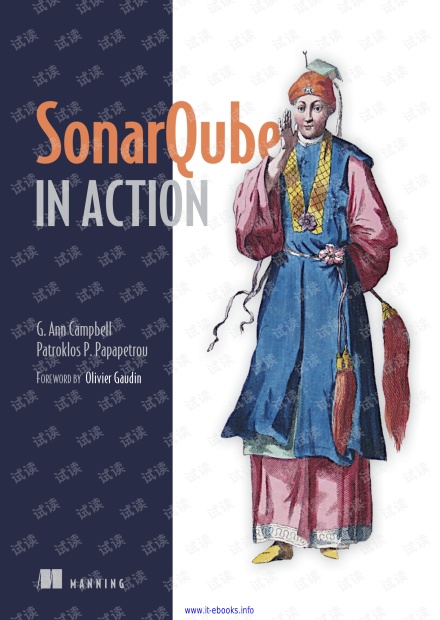 “Would you like to help me write a book about Sonar?” My reaction was immediate: “Yes!” I knew Patroklos Papapetrou from the Sonar mailing list, and I was aware that he was pitching Sonar in Action (now SonarQube in Action, to match the technology’s new name) to Manning. What I didn’t know was that he wanted a coauthor. Because I was a native English speaker and active (and helpful) on the list, he thought of me. I had only been a member of the list for about six months, but I’d been aware of Sonar since late 2008 when my boss came across a mention of Sonar and asked me to evaluate it. I was coding in Java at the time, but I had started my programming career with Perl and C. Lint was your friend, and bugs were found the hard way—by the users. So I found Sonar intriguing. It promised to scan each line of code and point out all kinds of things that were wrong or could go wrong. But to use it, you had to be building with Maven. Unfortunately, we were in an Ant-build shop. Sonar was off the table. Fast-forward to early 2010. Sonar was approximately three years old, but already it was gaining broad acceptance among community and enterprise users and being downloaded more than 2,000 times a month. Patroklos had found the Sonar website while researching software quality tools, and it was a classic boy-meets-software story. (Cue the sappy music.) It didn’t take long before he was in love and Sonar was one of his favorite tools. Meanwhile, I had begun moving our Ant builds to Jenkins (it was still called Hud- son then), and I stumbled across the Sonar plugin for Hudson. It works differently now, but at the time, it performed a shallow “Maven-ization” of a non-Maven project and ran an analysis. Hmmm. Maybe Sonar was back on the table.

37浏览
I started working on Angular in Action while Angular was still in early beta for ver- sion 2.0. Angular then underwent regular and rapid iterations during the book’s writ- ing and development. But ...