微软软件测试之道(How We Test Software at Microsoft) 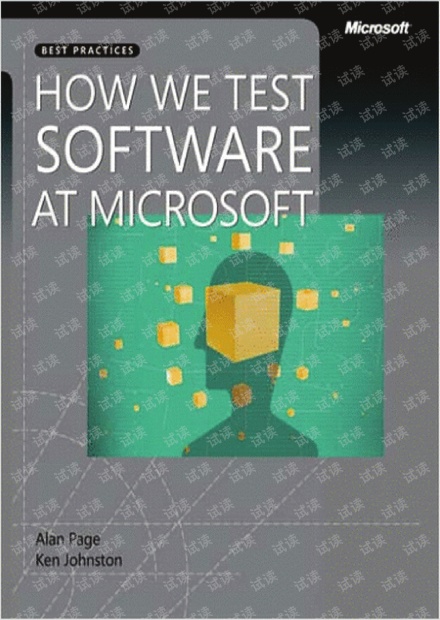 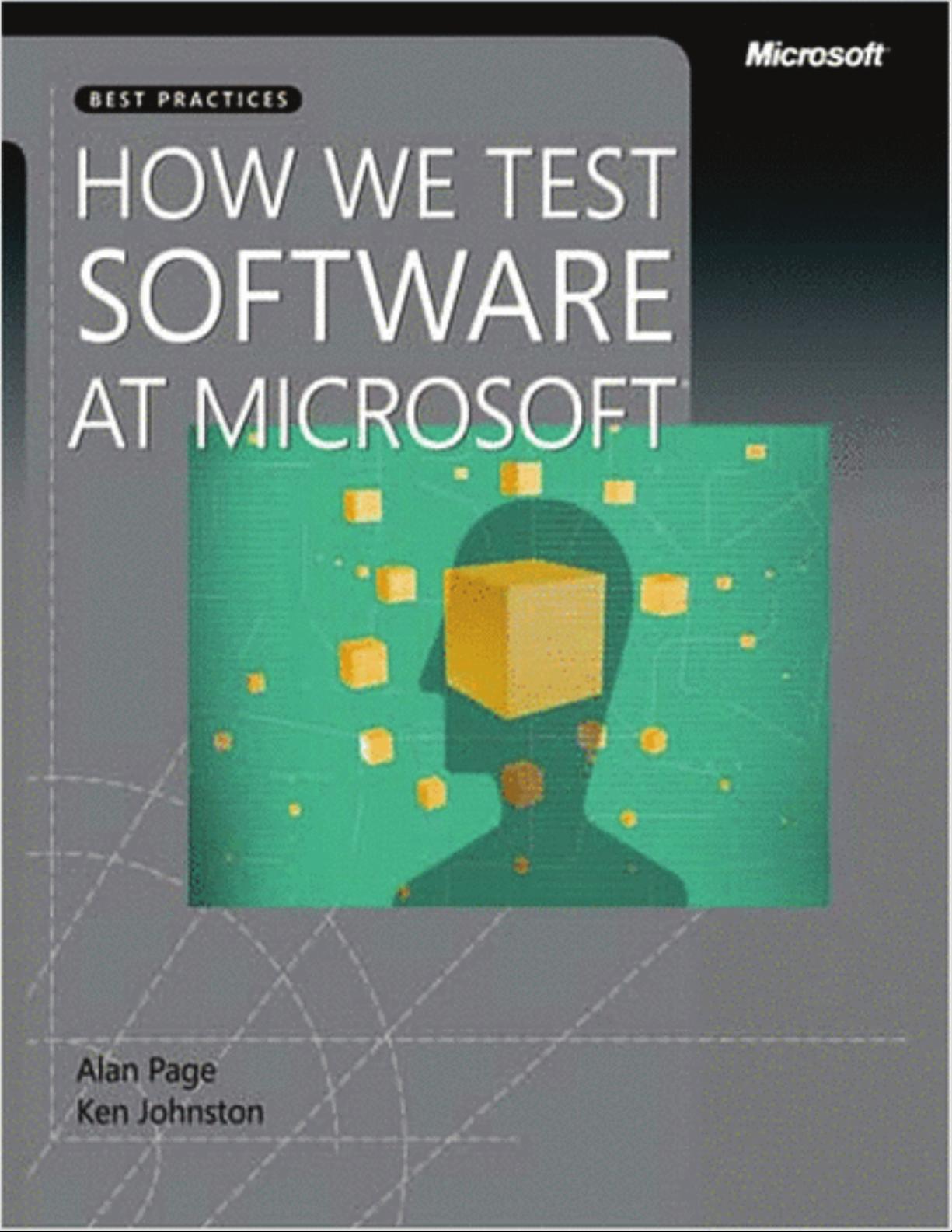 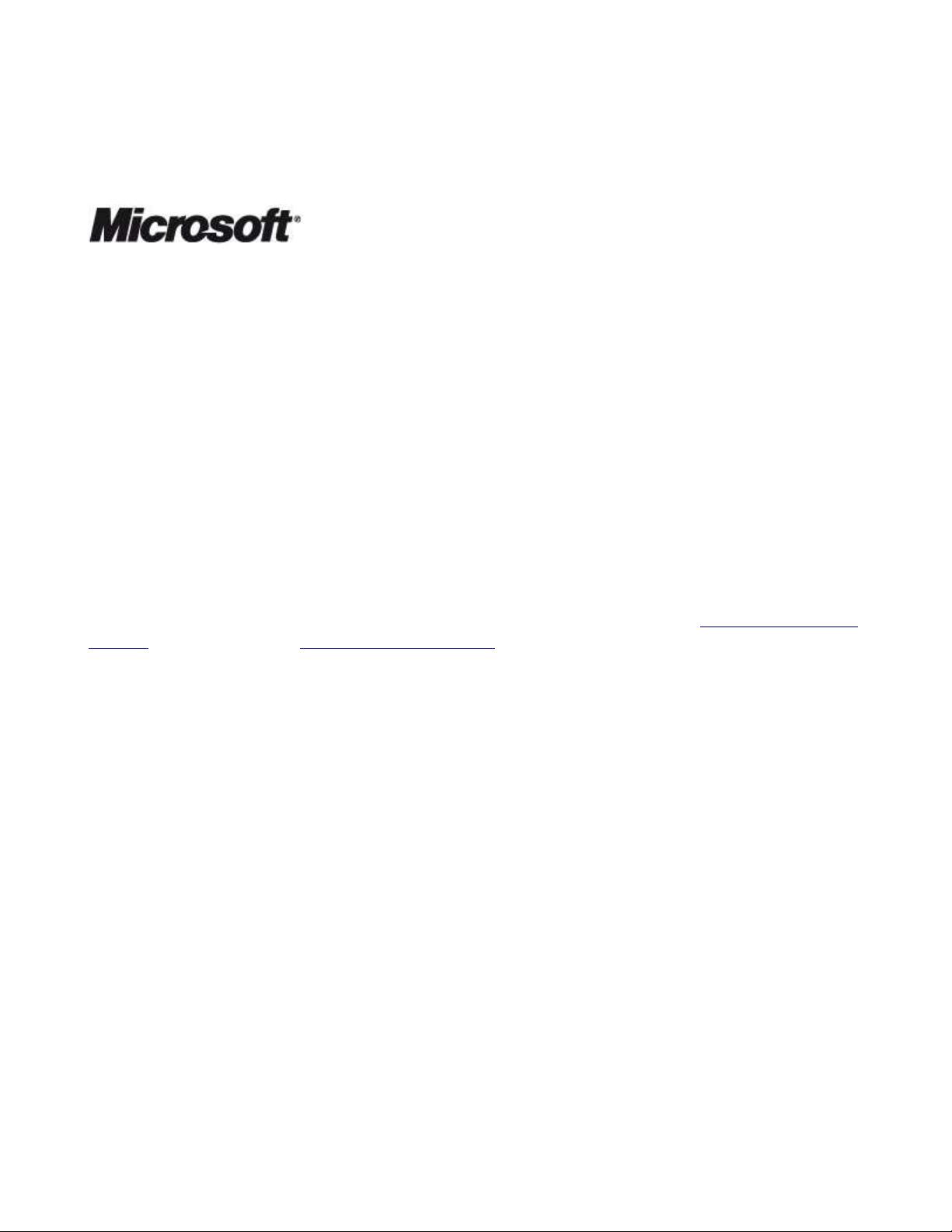 How We Test Software at Microsoft
Alan Page
Ken Johnston
Bj Rollison
PUBLISHED BY Microsoft Press A Division of Microsoft Corporation
One Microsoft Way Redmond, Washington 98052-6399
Copyright © 2009 by Microsoft Corporation
ISBN: 9780735624252
All rights reserved. No part of the contents of this book may be reproduced or transmitted in any form
or by any means without the written permission of the publisher.
Library of Congress Control Number: 2008940534
Printed and bound in the United States of America.
1 2 3 4 5 6 7 8 9 QWT 3 2 1 0 9 8
Distributed in Canada by H.B. Fenn and Company Ltd.
A CIP catalogue record for this book is available from the British Library.
Microsoft Press books are available through booksellers and distributors worldwide. For further
information about international editions, contact your local Microsoft Corporation office or contact
Microsoft Press International directly at fax (425) 936-7329. Visit our Web site at www.microsoft.com/
mspress. Send comments to mspinput@microsoft.com.
Microsoft, Microsoft Press, Access, Active Accessibility, Active Directory, ActiveX, Aero, Excel,
Expression, Halo, Hotmail, Hyper-V, Internet Explorer, Microsoft Surface, MS, MSDN, MS-DOS,
MSN, OneNote, Outlook, PowerPoint, SharePoint, SQL Server, Virtual Earth, Visio, Visual Basic,
Visual Studio, Voodoo Vince, Win32, Windows, Windows Live, Windows Media, Windows Mobile,
Windows NT, Windows Server, Windows Vista, Xbox, Xbox 360, and Zune are either registered
trademarks or trademarks of the Microsoft group of companies. Other product and company names
mentioned herein may be the trademarks of their respective owners.
The example companies, organizations, products, domain names, e-mail addresses, logos, people,
places, and events depicted herein are fictitious. No association with any real company, organization,
product, domain name, e-mail address, logo, person, place, or event is intended or should be inferred.
This book expresses the author's views and opinions. The information contained in this book is
provided without any express, statutory, or implied warranties. Neither the authors, Microsoft
Corporation, nor its resellers, or distributors will be held liable for any damages caused or alleged to be
caused either directly or indirectly by this book.
Acquisitions Editor: Ben Ryan
Project Editor: Lynn Finnel
Editorial Production: Waypoint Press
Cover Illustration: John Hersey
Body Part No. X14-71546 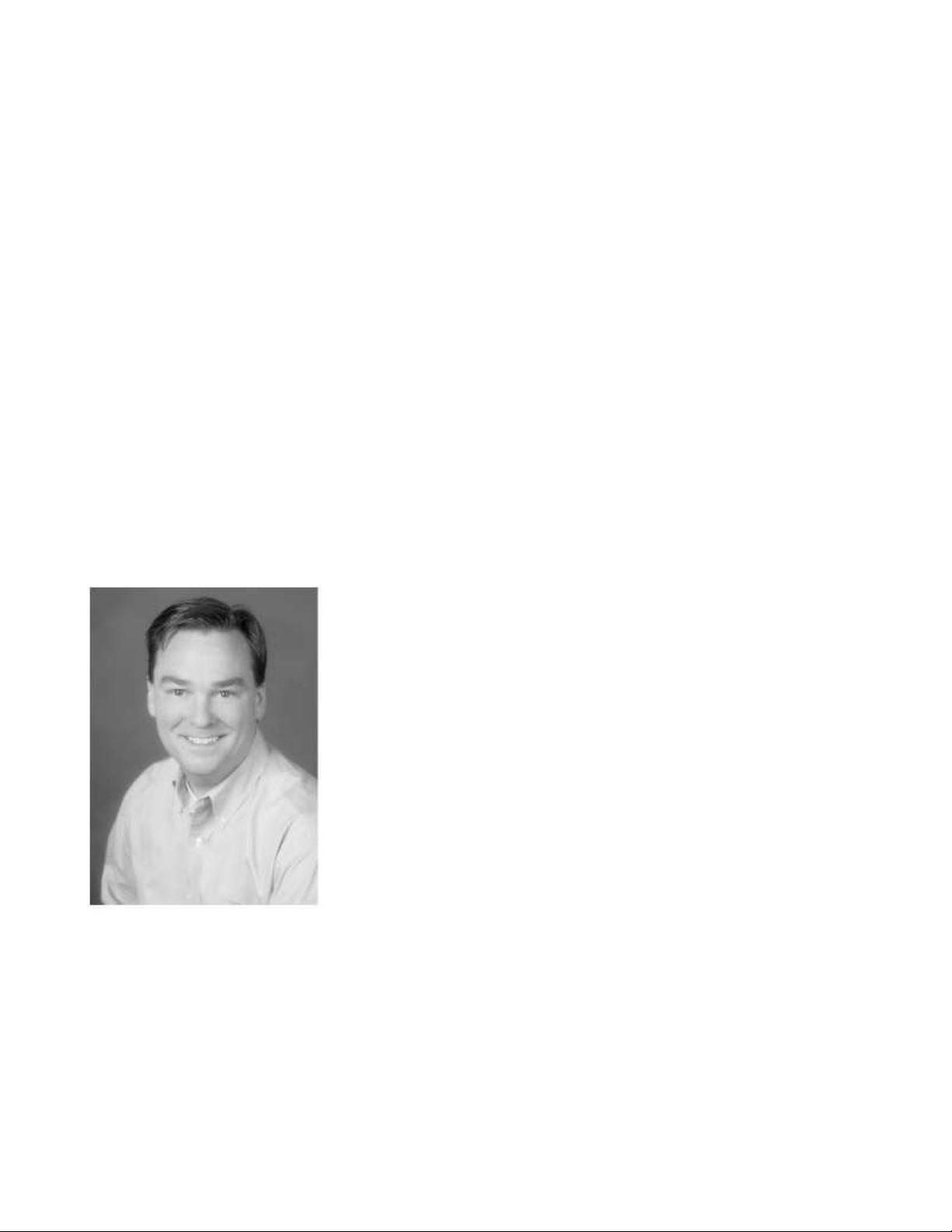 To my wife, Christina, and our children, Cole and Winona, who sacrificed their time with me so I could
write this book; and for my parents, Don and Arlene, for their constant support, and for giving me a
sanctuary to write.
—Alan Page
To my children, David and Grace, for allowing their dad the time to write; and to my wife, Karen, who
while I was working on a presentation for a testing conference first suggested, "Why don't you just call
it 'How we test at Microsoft.'" Without those words (and Alan leading the way), we would not have
started or finished this project.
—Ken Johnston
To my mother and father for their unending love, sage wisdom, and especially their patience. I also
want to thank my 6-year-old daughter Elizabeth whose incessant curiosity to learn new things and
persistent determination to conquer diverse challenges has taught me that the only problems we cannot
overcome are those for which we have not yet found a solution.
—Bj Rollison
This book is dedicated to the test engineers at Microsoft who devote themselves to the most challenging
endeavor in the software process, and who continue to mature the discipline by breaking through
traditional barriers and roles in order to help ship leading-edge, high-quality software to our
customers. For us, it is truly a privilege to mentor and work alongside so many professional testers at
Microsoft, because through our interactions with them we also continue to learn more about software
testing.
About the Authors
Alan Page began his software testing career in 1993 and joined Microsoft in 1995. In Alan's career at
Microsoft, he has worked on various versions of Windows, Internet Explorer, and Windows CE. While
a member of the Windows CE team, Alan became one of Microsoft's first Test Architects in 2001. Alan
joined the Engineering Excellence team in 2005 and is currently the Director of Test Excellence at
Microsoft, where he and his team provide technical training and consulting for testers at Microsoft 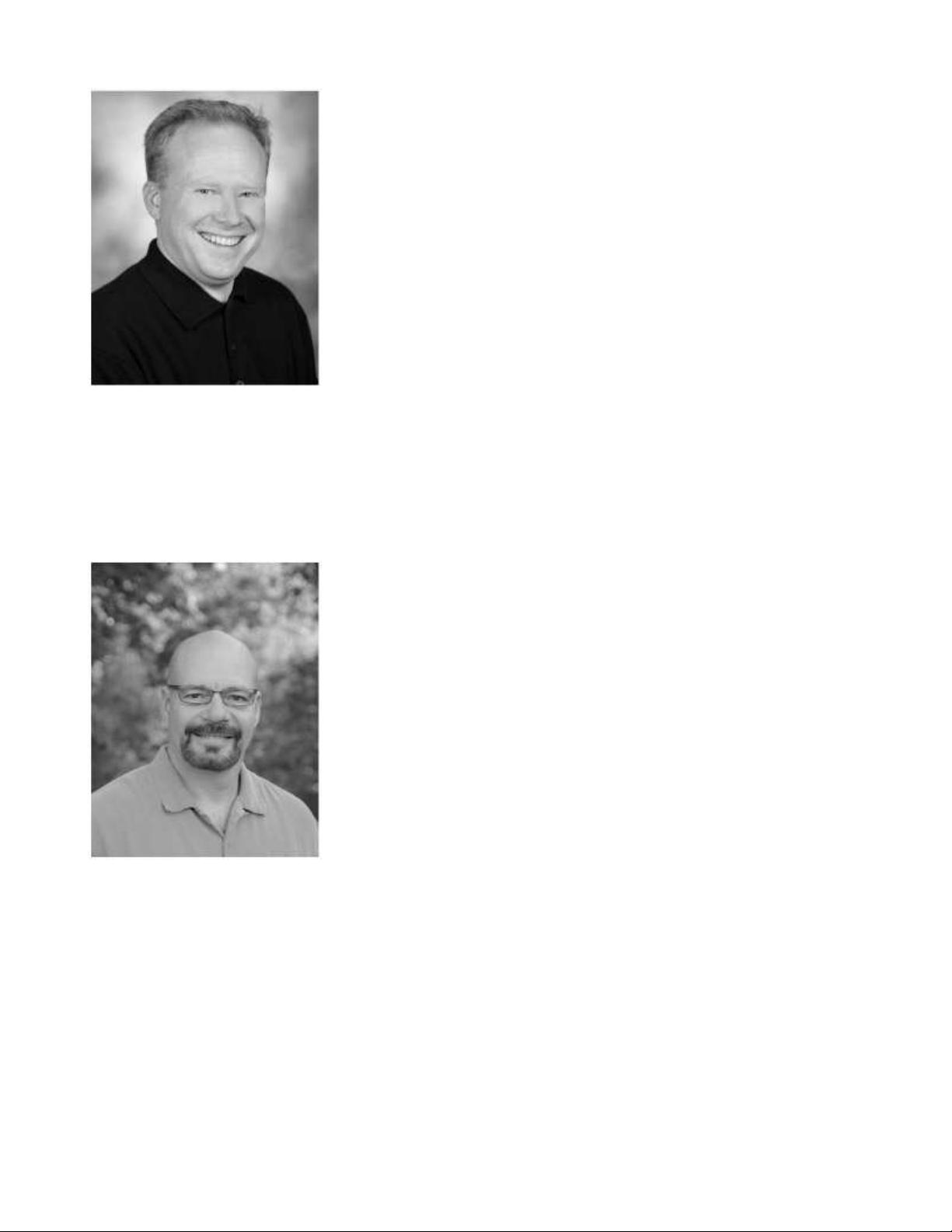 Ken Johnston is the Group Manager for the Microsoft Office Internet Platform & Operations team.
This team develops manageability features for server products and services as well as provides live site
operations support for Office Online, Office Live, CRM Online and several other services. Since
joining Microsoft in 1998 Johnston has filled many other roles, including test lead on Site Server and
MCIS and test manager on Hosted Exchange, Knowledge Worker Services, Net Docs, and the
Microsoft Billing and Subscription Platform service. For two and a half years (2004–2006) he served as
the Microsoft Director of Test Excellence.
Bj Rollison is a Test Architect in the Engineering Excellence team. He began his Microsoft career in
1994, working on Windows 95. He also worked on various releases of Internet Explorer, Outlook 98,
and several smaller projects until becoming the Director of Test in 1999. Prior to Microsoft, Bj worked
for a small OEM company in Japan building hardware and software solutions for small businesses. Bj
is a frequent speaker at international conferences, contributes regularly to professional trade journals,
and also teaches courses in software testing and test automation for the University of Washington
Extension Program.
Acknowledgments
This book never would have happened without the help of every single tester at Microsoft. Many
helped directly by reviewing chapters or writing about their experiences in testing. Others helped by
creating the legacy of software testing at Microsoft, or by continuing to innovate in the way we test 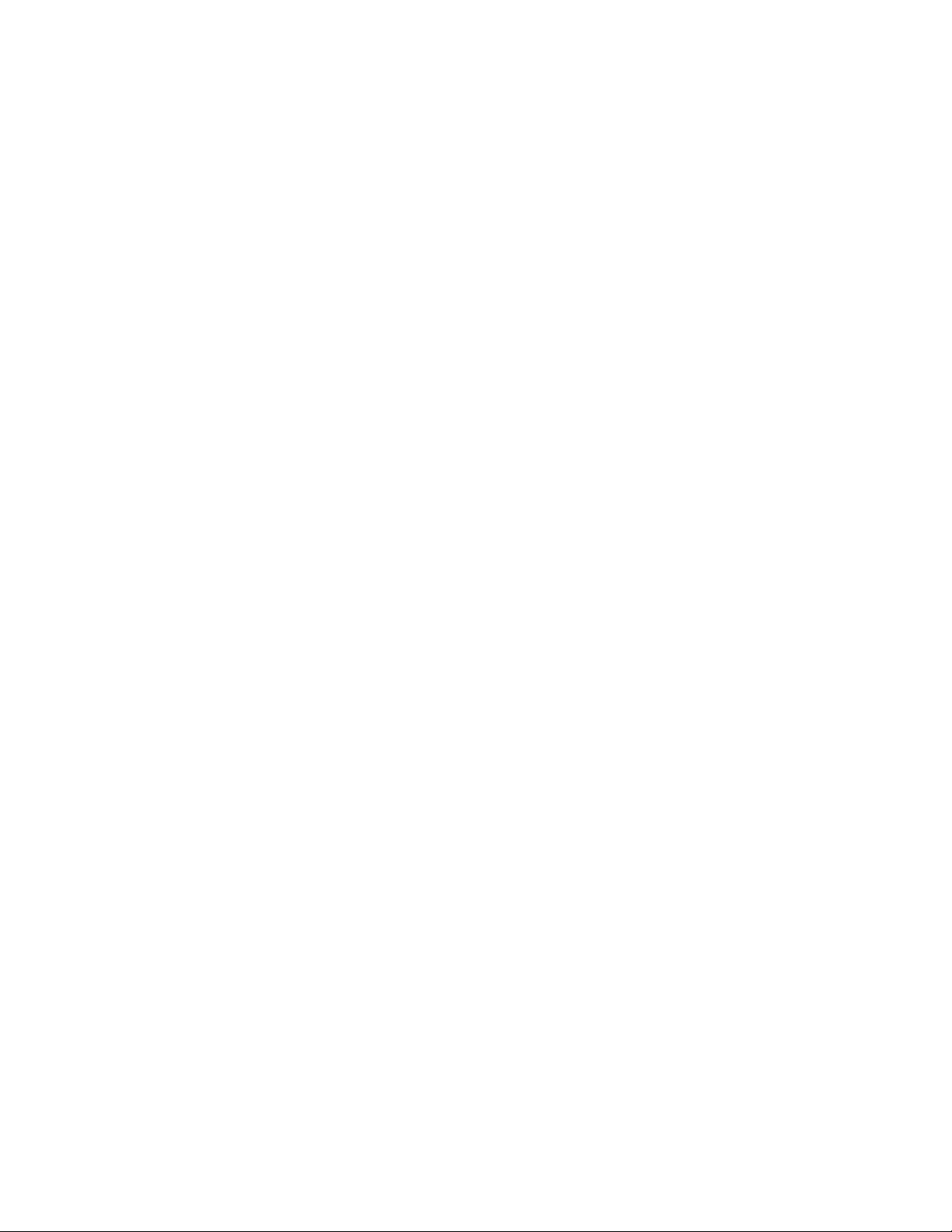 software.
Including the names of all 9,000 testers at Microsoft would be impractical (especially when many
former employees, people from other disciplines, and even external reviewers contributed to the
completion of this book). On the other hand, we do want to call out the names of several people who
have contributed substantially to the creation of this book.
This book grew out of the opinions, suggestions, and feedback of many current and former Microsoft
employees. Some of the most prominent contributors include Michael Corning, Ed Triou, Amol Kher,
Scott Wadsworth, Geoff Staneff, Dan Travison, Brian Rogers, John Lambert, Sanjeev Verma, Shawn
McFarland, Grant George, Tara Roth, Karen Carter-Schwendler, Jean Hartman, James Whittaker, Irada
Sadykhova, Alex Kim, Darrin Hatakeda, Marty Riley, Venkat Narayanan, Karen Johnston, Jim Pierson,
Ibrahim El Far, Carl Tostevin, Nachi Nagappan, Keith Stobie, Mark Davis, Mike Blaylock, Wayne
Roseberry, Carole Cancler, Andy Tischaefer, Lori Ada-Kilty, Matt Heusser, Jeff Raikes, Microsoft
Research (especially Amy Stevenson), the Microsoft Test Excellence Team, the Microsoft Test
Leadership Team, and the Microsoft Test Architect Group.
We'd also like to thank Lynn Finnel, the Project Editor for this book, who continued to give us
encouragement and support throughout the creation of this book.
Introduction
Overview
I still remember the morning, sometime late in the fall of 2007, when my manager at the time, Ken
Johnston, uttered these five words, "You should write a book."
He had just come back from delivering a talk at an industry test conference (not coincidentally titled,
"How We Test Software at Microsoft,") and was excited by the audience reception. Ken loves to give
presentations, but he somehow thought I should be the one to write the book.
I humored him and said, "Sure, why not." I went on to say that the book could cover a lot of the things
that we teach in our software testing courses, as well as a smattering of other popular test approaches
used at Microsoft. It could be interesting, but there are a ton of books on testing—I know, I've probably
read a few dozen of them—and some of them are really good. What value to the testing community
could yet another book provide?
I was about to talk the nonsense out of Ken when I realized something critical: At Microsoft, we have
some of the best software test training in the world. The material and structure of the courses are
fantastic, but that's not what makes it so great. The way our instructors tie in anecdotes, success stories,
and cool little bits of trivia throughout our courses is what makes them impactful and memorable. I
thought that if we could include some stories and bits of information on how Microsoft has used some
of these approaches, the book might be interesting. I began to think beyond what we teach, of more test
ideas and stories that would be fun to share with testers everywhere. I realized that some of my favorite
programming books were filled with stories embedded with all of the "techie" stuff.
The next thing I knew, I was writing a proposal. An outline began to come together, and the form of the
book began to take shape, with four main themes emerging. It made sense to set some context by
talking about Microsoft's general approaches to people and engineering. The next two sections would
focus on how we do testing inside Microsoft, and the tools we use; and the final section would look at
the future of testing inside Microsoft. I sent the proposal to Microsoft Press, and although I remained

微软软件测试圣经(How We Test Software at Microsoft)

How We Test Software at Microsoft

How We Test Software at Microsoft

微软的软件测试之道（how we are test software at Microsoft）

5星 · 资源好评率100%
software engineers should gain a good understanding of the limited automation provided by the available testing tools and how to improve the current test infrastructure and conduct a fully automated .

4星 · 用户满意度95%
google 如何测试软件 Google is a melting pot of testers from various companies, all using a different term for a different type of test We standardized: •Small tests •Medium tests •Large tests •...

5星 · 资源好评率100%
书的目录 ... About the Author Acknowledgments We Want to Hear from You! Introduction About the Second Edition ... What we've heard from expert reviewers about Ron Patton's Software Testing Ind

5星 · 资源好评率100%
Learn how to find problems in any computer program, how to plan an effective test approach and how to tell when software is ready for release. Updated from the previous edition in 2000 to include a .
评论 收藏
内容反馈